Abby Ferrell, a Senior Chorister (alto) in the Most Pure Heart of Mary Schola Cantorum spent a week last summer singing in the National Catholic Youth Choir under the direction of Andre Heywood. Below is a clip of the choir singing Palestrina’s beautiful Sicut cervus. Enjoy!

Click here for pictures and here for videos of the 2018 choir. Congratulations Abby!

The Most Pure Heart of Mary Schola Cantorum welcomed its largest incoming class of new singers (Probationers) this year with 22 in all: 9 boys and 13 girls. It no doubt helped that the choir hosted a choir camp in early August for more than 40 children. All agreed it was a wonderful week of music, which culminated in a sung Mass for the Feast of St. Lawrence.

Activities ranged from learning about the kinds of notes and clapping rhythms to singing folk songs and Gregorian chant. Of course, it wouldn’t have been a proper choir camp without solfege (do, re, mi…) and needless to say all of the children can now sing the major scale (with hand signs) up and down and had fun performing various renditions of Do, A Dear from The Sound of Music.

My favorite comment came from a boy named Isaiah, who exclaimed somewhat surprised after the 1st day, “Dr. Tappan, this camp is actually fun!” The second day was only half over when he told me he was definitely going to join the choir. I related the story to his mother, who laughed and said she wasn’t going tell him that he never had a choice in the first place. 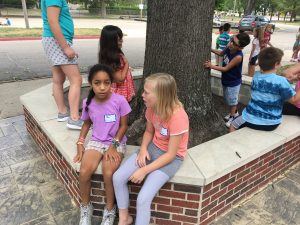 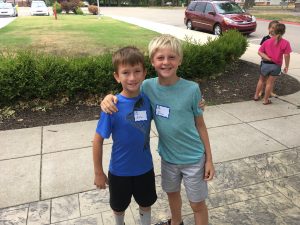 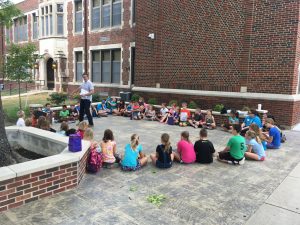 “The Catholic liturgy is the supreme example of an objectively established rule of spiritual life. It has been able to develop… in every direction, and in accordance with all places, times, and types of human culture. Therefore it will be the best teacher of the via ordinaria–the regulation of the religious life in common, with, at the same time, a view to actual needs and requirements.” (R. Guardini, The Spirit of the Liturgy)

The great problem with the Universal Prayer of the Roman Catholic Church today is that for all practical purposes (speaking subjectively) it has ceased to be the Universal Prayer of the Roman Catholic Church. Those things that allowed the Mystical Body of Christ to worship as one family, transcending both the limitations of time and space, have been shoved aside if not outright discarded. It amazes me that within living memory the average Catholic could travel anywhere in the world in which the Latin Rite was celebrated, trusty hand missal in tow, and pray the Mass, even in foreign lands. The homily might have been in a different language or the Mass might have had a certain European, American, African or Asian feel, depending upon where one found oneself on Sunday morning, but the differences were rather minor–but no more.

Contrast this with the experience of typical Catholics today, who go to Mass in their  own state or country and wonder if they still inhabited the same planet, much less attend the same Mass. Anymore, the Holy Sacrifice has taken on the fluidity of one’s gender. What, you don’t like it? Just change it and make it whatever you want it to be! Admittedly, the experimentation is NOT what it was in the 70s, nevertheless, the mentality exists that the Sacred Liturgy can be adapted and personalized in an almost unlimited number of ways.

Our liturgical problem is really symptomatic of a much deeper problem, the loss of Faith in Christ and in His Church (really the two problems are deeply connected). Thankfully I meet more and more young people who are seriously embracing Faith in Christ and the Church. As they do so, they are discovering the great cultural riches of the Church, whether in Her Liturgy or prayer life, the lives of Her saints or in Her moral life. This group of people is by no means a majority, but it is a strong and vibrant minority. I also see holy priests coming from among them, and Deo gratias for that.

Young people today aren’t yearning for the ancient expressions of the Church’s liturgical life merely due to a distorted view of a supposedly golden former age, but because their very souls  and their humanity need these things to pray in the first place. Young people are mired in individualism and simply handing out more of it in the form of giving them “what they want” is not going to bring them to Christ. Rather, the answer lies in uniting them to the universal, to what is True, Beautiful and Good–to God; uniting them to the Church Militant, the Church Suffering and the Church Triumphant. The Sacred Liturgy used to have the power to do this (again, subjectively speaking).

What follows is a very simplistic list, in no particular order, of some of the externals in the Church’s liturgical life that had the power to draw the believer out of his own little kingdom and into the universal family of the Church. Would that return sooner rather than later.

I would like to end where I began, with Gaurdini. He writes “The primary and exclusive aim of the liturgy is not the expression of the individual’s reverence and worship for God. It is not even concerned with the awakening, formation, and sanctification of the individual soul as such. Nor does the onus of liturgical action and prayer rest with the individual. It does not even rest with the collective groups, composed of numerous individuals, who periodically achieve a limited and intermittent unity in their capacity as the congregation of a church. The liturgical entity consists rather of the united Body of the faithful as such–the Church–a body which infinitely outnumbers the mere congregation.

I don’t hope or even desire that every Mass be exactly the same, but I should be able to experience the reality of the Mystical Body of Christ instead of banging my individualism up against someone else’s. This is something I hope we can all pray for.

Thanks to a parishioner, Allan Goodman, I am able to share these beautiful photographs from Pentecost Sunday, 2018, when the Rev. Mr. Nicholas Ashmore served his first Mass as a Deacon. The MPHM Schola Cantorum was privileged to sing for the occasion.